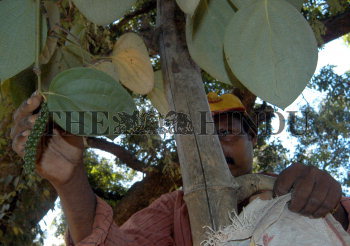 Caption : A farmer picking green pepper near Thrissur in Kerala. The low yields this year has forced the farmers to take up harvesting themselves as it is not economical to employ labour. The production this year is estimated to be down by 30 per cent. In anticipation of drop in the supply, domestic demand has increased in recent weeks. The global supply is also to be less in 2006. The diversified use of pepper in the world market is evident from the use of pepper spray to disburse the protestors during the WTO Conference in Hong Kong recently. The farmers in developing countries were protesting as they suffer huge losses in export earnings as a result of subsidies granted in developed countries kept international prices of major commodities at lower level. Photo: K.K. Mustafah 17/12/2005