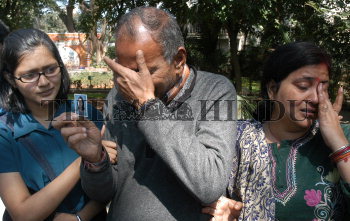 Caption : N. Singh (centre) father of Rashmi, grieving in fornt of the Press, along with his family members, in Bangalore, on December 15, 2005. Squadron leader Rupesh Kishore of the Yelahanka Air Force Station Base, accused of killing his wife Rashmi, is absconding since December 13, 2005. Photo: V. Sreenivasa Murthy