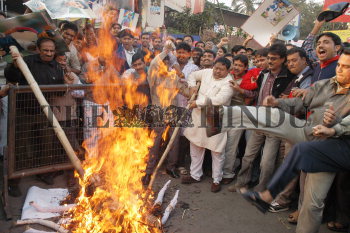 Caption : Supporters of former Indian captain Sourav Ganguly shout slogans as they burn an effigies while taking part in a demonstration in Kolkata, on December 15, 2005, to protest against Indian team coach Greg Chappell and the omission of Ganguly from the team. Indian selectors have dropped Ganguly from the squad for the third and final cricket Test match against Sri Lanka. Photo: Sushanta Patronobish