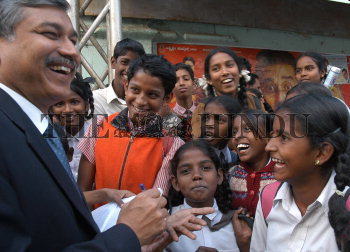 Caption : A young man wanted the Bangalore Police Commissioner Ajay Kumar Singh's autograph but did not have a piece of paper. He thus wanted the signature in his hand. When the Commissioner told him that it will get washed away, the lad said he would xerox the hand first. This incident happened after the Commissioner inaugurated the pre-paid auto counter, near Commercial Street, in Bangalore. Photo: V. Sreenivasa Murthy 14-12-2005