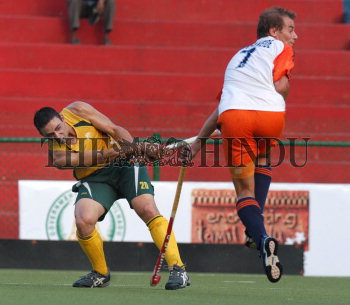 Caption : Matt Naylor (left) of Australia scoring the first goal past Sander van der Weide of Netherlands during the match in the six-nation Champions Trophy hockey tournament at the Mayor Radhakrishnan Stadium in Chennai on December 14, 2005. Photo: Vino John