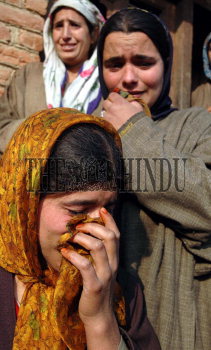 Caption : Kashmiri women wailing near their houses, which were damaged in an encounter, in which six Hizbul Mujahideen militants were killed in the long gun battle, by Sepical Operation Group of Jammu and Kashmir Police, at Gulabdagi in Baramulla district, some 50 kms from Srinagar. Photo: Nissar Ahmad 14-12-2005