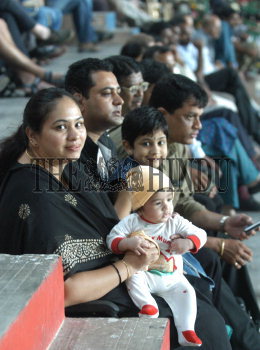 Caption : The Youngest spectator -- Even a four months old baby gets a chance to see the star players in action during the match between Germany and India in the six-nation Champions Trophy hockey tournament at the Mayor Radhakrishnan Stadium in Chennai on December 14, 2005. Photo: Vino John