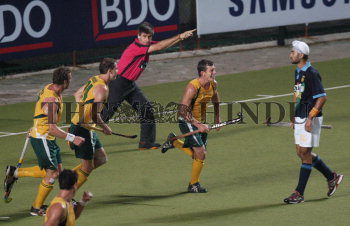 Caption : Australia's Dean Butler (second from left) exults after scoring the second goal against India during the match in the six-nation Champions Trophy hockey tournament at the Mayor Radhakrishnan Stadium in Chennai on December 13, 2005. Photo: Vino John