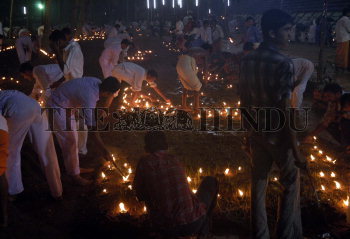 Caption : Oil lamps being lit in the premises of the Major Thonnal Devi Temple at Pallippuram near Thiruvananthapuram, as part of 'Lakshadeepam' in the temple on December 13, 2005. Thousands of devotees, including jawans from the CRPF camp, took part in the ritual despite heavy rain. Photo: C. Ratheesh Kumar