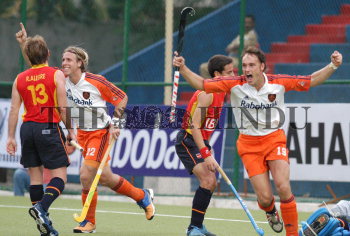 Caption : Matthijs Brouwer (ext.right) of Netherlands who scored two goals celebate with his teammate Roderick Weusthof during the match against Spin in the six-nation Champions Trophy hockey tournament at the Mayor Radhakrishnan Stadium in Chennai on December 13, 2005. Photo: Vino John