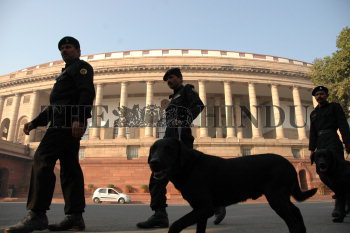 Caption : Black Cat commandos with sniffer dogs checking the Parliament House on the occasion of the 4th Anniversary of the Parliament Attack, before leaders paid their homage, at the memorial of the Martyrs of 13th December 2001, in New Delhi on December 13, 2005. Photo: Rajeev Bhatt