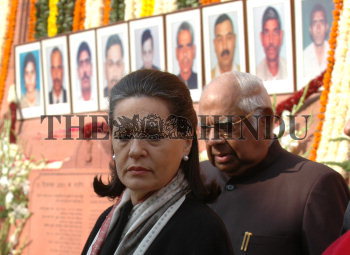 Caption : UPA chairperson, Sonia Gandhi and Lok Sabha Speaker, Somnath Chatterjee, stand near the memorial of the Martyrs of 13th December 2001, after paying homage on the 4th Anniversary, at the Parliament House in New Delhi on December 13, 2005. Photo: Rajeev Bhatt