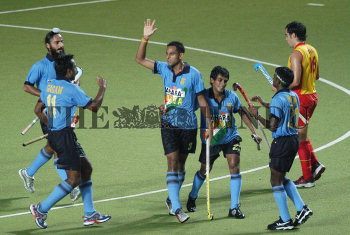 Caption : Kanwalpreet Singh (centre) of India celebrates his penalty corner goal with teammates (from left) Rajpal Singh, Gagan Ajit Singh, Arjun Halappa and V.S. Vinay as Xavier Ribas of Spain looks on during the match between India and Spain in the six-nation Champions Trophy hockey tournament at the Mayor Radhakrishnan Stadium in Chennai on December 10, 2005. Photo: Vino John