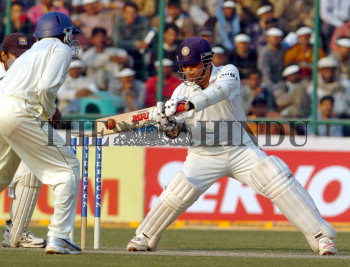 Caption : Indian batsman Sachin Tendulkar in a punishing mood during his unbeaten century knock on the first day of the second cricket Test match between India and Sri Lanka at the Ferozeshah Kotla ground in New Delhi on December 10, 2005. He scored his 35th Test century, a world record, overtaking fellow countryman Sunil Gavaskar''s record of 34 Test centuries. Photo: S. Subramanium