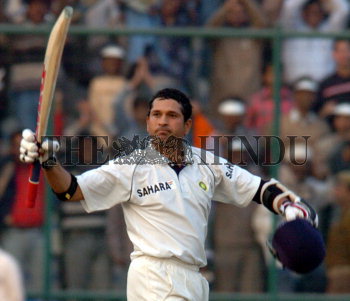 Caption : Indian batsman Sachin Tendulkar celebrates after scoring his 35th Test century, a world record, on the first day of the second cricket Test match between India and Sri Lanka at the Ferozeshah Kotla ground in New Delhi on December 10, 2005. Photo: S. Subramanium