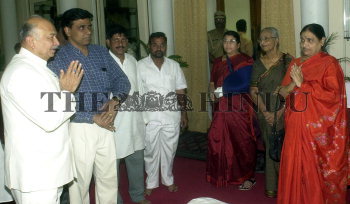 Caption : Andhra Pradesh Governor, Sushilkumar Shinde is interacting with the family members of the former Prime Minister, P. V. Narasimha Rao on the occasion of his first death anniversary in Hyderabad on December 10, 2005. Photo: D. Gopalakrishnan