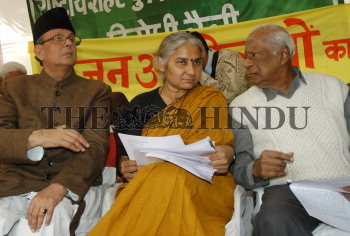 Caption : Medha Patkar, A. B. Bardhan, V. P. Singh and Swami Agnivesh (not in picture) addressed the gathering from all over the states who have been displaced due to government project like Dam's etc at the Parliament Street Police Station after they tried to force into Parliament in NEW Delhi on December 09, 2005. Photo: V. V. Krishnan