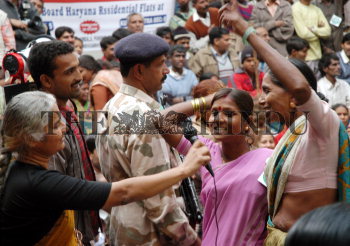 Caption : Men and women belonging to variuos states who have been displaced due to government projects like dams etc. at a protest rally at Jantar Mantar were later taken to Parliament Street Police Station when they tried to get into Parliament in New Delhi on December 09, 2005. Medha Patkar addressing from the police station. Photo: V. V. Krishnan