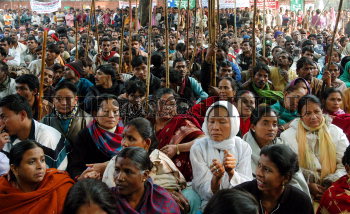 Caption : Men and women belonging to variuos states who have been displaced due to government projects like dams etc. at a protest rally at Jantar Mantar were later taken to Parliament Street Police Station when they tried to get into Parliament in New Delhi on December 09, 2005. Photo: V. V. Krishnan