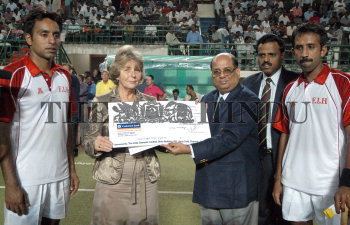 Caption : N. Ramachandran, Executive Director, India Cements, handing over a cheque to Ms. Els van Breda Vriesman, President of International Hockey Federation (FIH), as Indian hockey captain Gagan Ajit Singh (ext left), Mudassar Ali Khan of Pakistan (ext right) and IHF Secretary K. Jothikumaran look on at the Mayor Radhakrishnan Stadium in Chennai on December 8, 2005. The cheque was handed over during a presentation ceremony at half-time during the charity hockey match between India-Pakistan and Rest of the World XI to raise funds for earthquake victims in India and Pakistan. Photo: Vino John