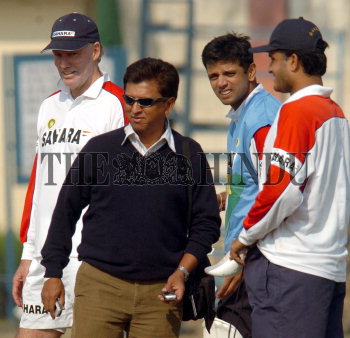 Caption : Kiran More (second from left), Chairman of the Selection Committee, seen with Indian coach Greg Chappell, captain Rahul Dravid and Sourav Ganguly (ext right) during the practice session at the Palam Grounds in New Delhi on December 8, 2005. The second cricket Test match between India and Sri Lanka will be held at the Ferozeshah Kotla ground in New Delhi on December 10, 2005. Photo: S. Subramanium