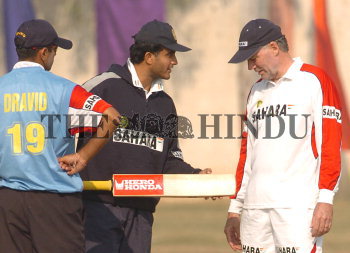 Caption : Former Indian captain Sourav Ganguly (centre) talks to coach Greg Chappell by showing his bat as skipper Rahul Dravid looks on during the practice session at the Palam Grounds in New Delhi on December 8, 2005. The second cricket Test match between India and Sri Lanka will be held at the Ferozeshah Kotla ground in New Delhi on December 10, 2005. Photo: S. Subramanium