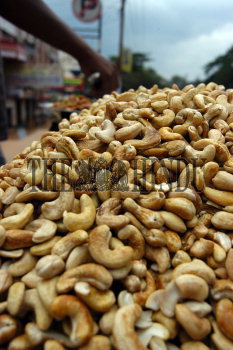 Caption : A vendor selling fried cashew nuts in the street of Kerala's Thrissur city. Raw cashewnut production in the country is likely to decline by 30 per cent as incessant rains have adversely affected flowering of plantations in Kerala, Karnataka, Goa and Maharashtra which comprises 60 per cent of total cashew acreage and produces 3 lakh tonnes of raw nuts. The total exports of cashew kernels in April-September 2005-06 stood at 59,627 tonnes valued at Rs 1,343.27 crores against 61,724 tonnes valued at Rs 1,240.47 crores last fiscal. Photo: K.K. Mustafah 8/12/2005