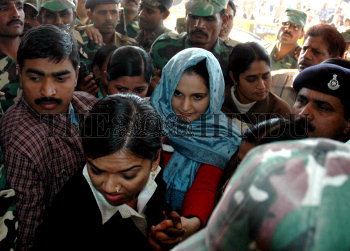 Caption : Underworld Don Abu Salem's companion, Monica Bedi is being produced in Bhopal District Court after 2 day's police remand in connection with `fake passport case', in Bhopal on December 07, 2005. She has been remanded to Judicial Custody till December 20, 2005. Photo: A. M. Faruqui