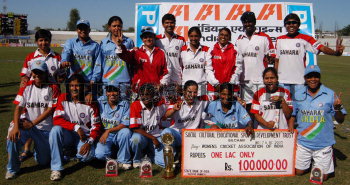 Caption : The Indian women cricket team celebrates with the trophy and the prize money after beating England by ten wickets in the fourth one day international cricket match held at the S.M. Dev Stadium in Silchar, Assam, on December 7, 2005. India leads the five-match series by 3-1. Photo: Ritu Raj Konwar