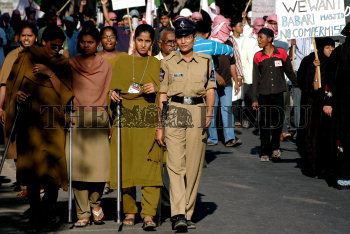 Caption : Woman police carries lathi as they are following the protest rally organised by the Darsgah Jihad-o-Shahadat (DJS) in Hyderabad on December 06, 2005. demanding the reconstructing the Babri Masjid on the same site where the mosque was situated in Ayodhya, on the14th anniversary of its demolition. Photo: Mohammed Yousuf.