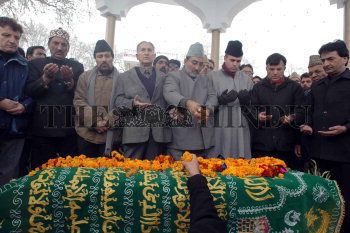 Caption : National Conference President and MP, Omar Abdullah paying tributes to his grand father Sheikh Mohammad Abdullah by laying wreath of flowers on his grave on the occasion of 100th birth anniversary at Hazaratbal in Srinagar on December 05, 2005. Photo: Nissar Ahmad