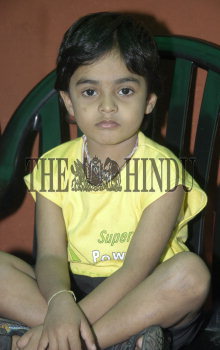 Caption : Master Mahathej, a 4-year-old with sharp memory displays his skill by telling the names of all countries in the world, the names of National and State leaders, scientists, poets, computer input and output divices, human body PARTS, names of industries, technical names in telecommunication field, Indian languages, names of festivals and to cap every thing else, reels from memory the names of swords in existence during Moghul period, with ease before Presspersons in Bangalore. Photo: K. Gopinathan, 05/12/2005.