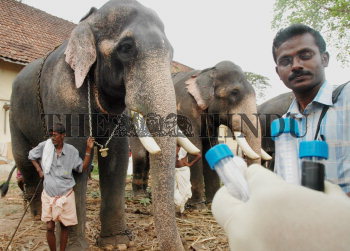 Caption : MEDICINE FOR THE JUMBOS: Elephant Care, a group of elephant lovers in Kochi organised a medical camp for the jumbos in the city on December 4, 2005. This is the first such camp and came in the wake of reports of widespread prevalence of various diseases among the jumbos that have been domesticated and are used for logging and at ceremonial occasions. Blood tests, eye checks etc were part of the medical camp in which nearly 20 elephants were provided medical check up. Photo: H. Vibhu 4/12/2005