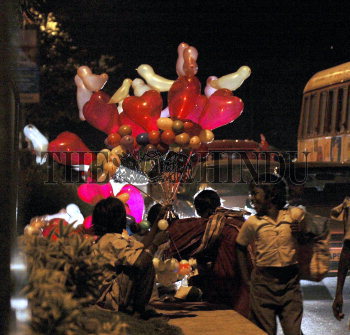 Caption : Despite economic progress and prosperity among various sections of the populace, the beggars continue to be enmeshed in their plight, which may never improve. Those who are blind or old are left to fend for themselves and steadily fall behind the rest of society. Here, a young balloon seller is waiting for prospective buyers at traffic intersection on the street of posh Jubilee Hills area where the former and present Chief Ministers of State reside in Hyderabad. The country is second most populous in the world with over a billion population of which an estimated 400 millions are children between 0 and 18 years of age, live in abject poverty. When children of their age play with balloons these children are out for their bread and butter during the chilly night, on December 04, 2005. Photo: Mohammed Yousuf