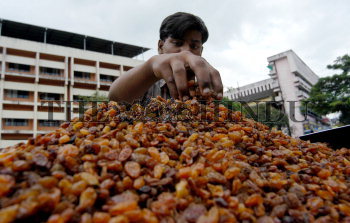 Caption : A boy selling dry grape at Kerala's Thrissur city,on December 04, 2005. The global potential of processed fruits even in dried and dehydrated form have put a thrust to horticulture development in the country.The utilisation of fruits and vegetables for processing in organised and unorganised sector is estimated to be around 2 per cent of total production and the installed capacity of food and vegetables processing industry in the country have increased from 1.108 million tonnes in 1993 to 2.328 million tonnes in 2004. Photo: K. K. Mustafah