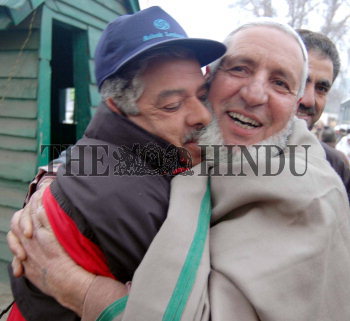 Caption : A Kashmiri pilgrims hugs his relative, as they leave for the Haj pilgrimage to the holy city of Mecca, in Srinagar on November 03, 2005. The first batch of Kashmiri Muslims left for the annual trip to Mecca. Two million people travel every year to Islam's holiest cities in Saudi Arabia to participate in the Haj, which serves to wipe away accumulated sins. The pilgrimage is mandatory for the able-bodied Muslims at least once in a lifetime, if they can afford it. Photo: Nissar Ahmad