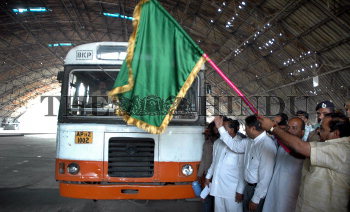 Caption : The Board of Director, APSRTC and Chairman, ZAC, K. Sanjeeva Reddy, flagging off the first bus at the "Mississippi" hangar, inside the Central Bus Station, Gowliguda, in Hyderabad, on December 02, 2005. Built in 1953, during Nizam period, it used to serve the commuters of district buses but was closed after the MGBS bus station was constructed. Photo:H. Satish