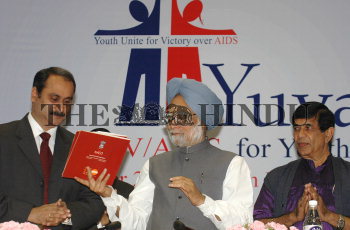 Caption : The Prime Minister Manmohan Singh, releasing the handbook "Quest on HIV and AIDS" at the National Youth Convention on 'HIV/AIDS' to mark the 'World AIDS Day' in New Delhi on December 1, 2005. The Union Minister for Health and Family Welfare Anbumani Ramadoss and the Union Minister of State for Statistics and Programme Implementation Oscar Fernandes (right), are also seen. Photo: Rajeev Bhatt