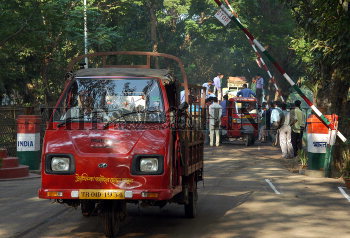 Caption : The Indo-Bangladeshi traders are busy handling fish loads at Agartala-Akhaura border in Tripura, one among the 7 Land Custom Stations that haa been notified for official trade between Tripura and Bangladesh, out of which 3 are operational at present. The present volume of trade in about Rs.120 million per annum and expected to increase fast, with the bringing down of tariff and other barriers under SAARC initiative. The declared goal of SAARC nations to make South-east Asia a "Free Trade Area" has the potential of revolutionizing the Tripura Economy, which will put an end to the geographical isolation of the state. Serious initiatives have also been taken in recent years for getting a transit route through Bangladesh, to connect Tripura with the rest of India as well as to the Chittagong Port of Bangladesh. Many large towns in Bangladesh are within 150 Km of the towns in Tripura. Photo: A. Roy Chowdhury 25-11-2005