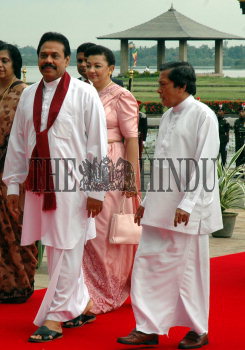 Caption : Ceremonial opening of the second session of the Sixth Parliament by new President MAHINDA RAJAPAKSE on November 25, 2005 and he is accompanied by the Speaker of the Parliament, W.J.M. Lokubandara. Shiranthi RAJAPAKSE, wife of the President, is also seen behind him. Photo: Sriyantha Walpola