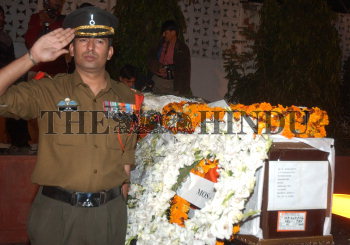 Caption : Soldiers are paying homage to the mortal remains of Ramankutty Maniappan of Border Roads Organisation, who was killed by the Taliban militants in Afghanistan on its arrival at the Delhi Airport on November 24, 2005. Photo: R.V. Moorthy