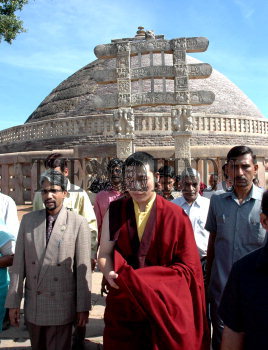 Caption : The 17th Gyalwa Karmapa Trinley Thaye Dorje offering prayer during his visit to the world heritage monument Sanchi, 68 kilometres from Bhopal on November 21, 2005. The foundation of this important centre at Sanchi was laid by Emperor Ashoka when he built a stupa and erected a monolithic pillar here. Ashoka built a total of eight stupas on the hilltop of Sanchi including the Great Stupa. Photo: A. M. Faruqui