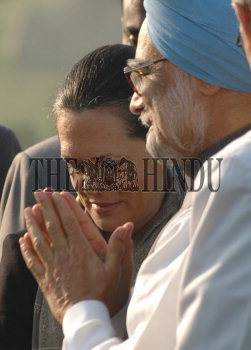 Caption : The Prime Minister Manmohan Singh and UPA president Sonia Gandhi at the Shakti Sthal to pay their tributes to the former Prime Minister Indira Gandhi on her 88th Birth Anniversary in New delhi on November 19, 2005. Photo: Rajeev Bhatt