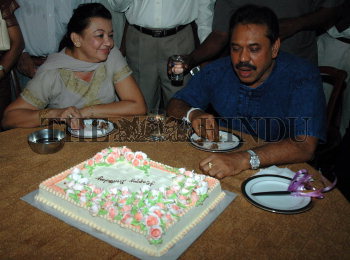 Caption : Sri Lanka's new President Mahinda Rajapakse and his wife Shirani Rajapakse along with party members and supporters at the Temple Trees, presidential residence, on November 18, 2005, after former won the presidential elections on his 60th birthday. Photo: Sriyantha Walpola