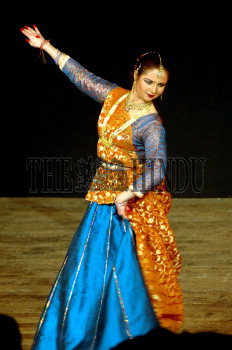 Caption : French kathak dancer, Isabelle Anna, performing in 'Rangotsav-2005' at Bharat Bhawan in Bhopal on November 15, 2005 night. Anna has been living in India for the past four years as a scholar of Indian Council for Cultural Relations in New Delhi. Photo: A. M. Faruqui 16/11/2005