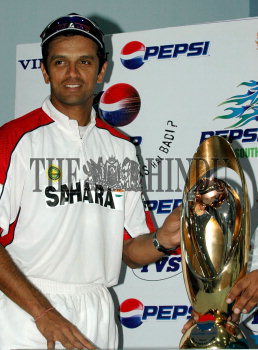 Caption : Indian Captain Rahul Dravid pose with the trophy for the Pepsi Trophy One Day Series during a press conference on the eve of the first one day international cricket match between India and South Africa at the Rajiv Gandhi International Stadium in Hyderabad on November 15, 2005. Photo: Mohammed Yousuf