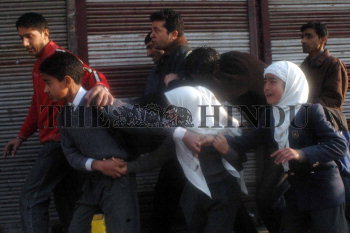 Caption : School children run for cover during gun-battle in the main market of central Srinagar, on November 14, 2005. Initial reports say that at least two persons were killed when separatist guerrillas lobbed a grenade and engaged security forces in a gun-battle. The guerrillas then stormed into a hotel, which was surrounded by the troops who exchanged fire with the rebels which is still going on. Photo: Nissar Ahmad