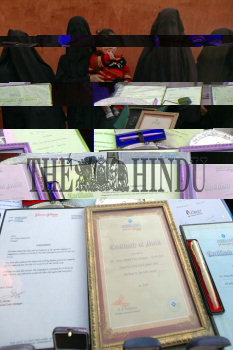 Caption : Rukaya wife of Tariq Ahmad Dar, holds her daughter along with relatives and displays certificates and medals of Tariq Ahmad at Press enclave in Srinagar on November 13, 2005. Tariq was arrested by Delhi Police in Srinagar in connection with Delhi bombing. Rukaya and her family members said Tariq was innocent and worked as a sales representative for a private company. Photo: Nissar Ahmad