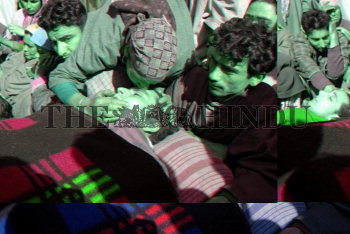 Caption : Relatives mourn near the bodies of Shabir Ahmad,(foreground) and Aijaz Ahmad during their funeral in Palhalan, about 30 kilometres north of Srinagar on November 13, 2005. The teenage boys died when they were caught in crossfire between the army soldiers and the militants. The militants were also killed in the gunbattle. Photo: Nissar Ahmad