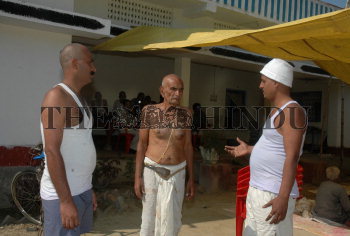 Caption : Father and brothers of slain Santosh Kumar Singh, who was shot dead by the Border Security Force at Pakauli BSF camp in the Raghopur Assembly Constituency in Vaishali district during the second phase of Bihar Assembly Elections, in front of their house. Photo: Ranjeet Kumar