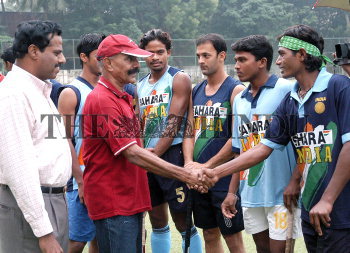 Caption : W.I. Dawaram, Vice-President, SDAT, accompanied by K. Jothikumaran (ext left), General Secretary, IHF, being introduced to the probables of Indian hockey team (from right) William Xalco, Muthuselvan, Viren Resquina and Bimal Lakra at the inauguration of the final camp for the Champions Trophy at the Mayor Radhakrishnan Stadium in Chennai on November 11, 2005. Photo: Vino John