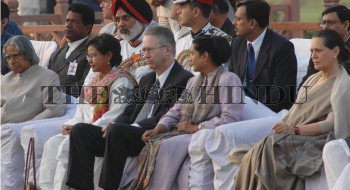 Caption : The President A.P.J. Abdul Kalam and UPA President, Sonia Gandhi with the daughters and son-in-law of former President, K. R. Narayanan are attending the last rites function of the former President at the Shanti Van on the banks of river Yamuna in Delhi on November 10, 2005. Photo: Rajeev Bhatt