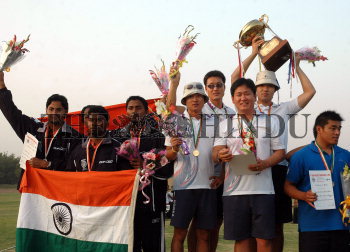 Caption : The Korean men's team, which won the gold medal in the recurve team event, celebrates at the Asian archery championship in New Delhi on November 10, 2005. Indian team which won the silver medal in the event is also seen with the national flag. Photo: Sandeep Saxena