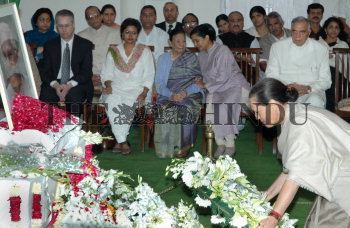 Caption : UPA president, Sonia Gandhi is paying homage to the former President, K. R. Narayanan at the Kapurthala House in New Delhi on November 10, 2005. Wife of the late President, Usha Naryanan along with her two daughters are also seen in the picture. Photo: Rajeev Bhatt